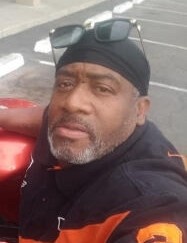 Peter Jones Brown Jr, departed life suddenly and unexpectedly April 13th 2022 in Columbus Ohio. Peter was born May 10, 1965 in South Bronx New York to the late Peter Jones Brown Sr and Mildred Russell. Peter later moved to Akron Ohio in 1974 with his mother and sisters. He attended Akron Public schools  where he graduated from Buchtel High School in 1984.

Peter later migrated to Columbus Ohio where he became employed with BKW Drywall for many years. Peter joined Naptown Riders MC in 2002 where he gained the title “road captain” leading fellow brothers and sisters on many motorcycle road-trips. Peter enjoyed riding motorcycles, reading books, cooking, and making funny jokes, but the one thing Peter loved doing the most was spending time with his children, grandchildren, friends and family. Peter will be missed by all who loved him.

To order memorial trees or send flowers to the family in memory of Peter Brown, Jr., please visit our flower store.