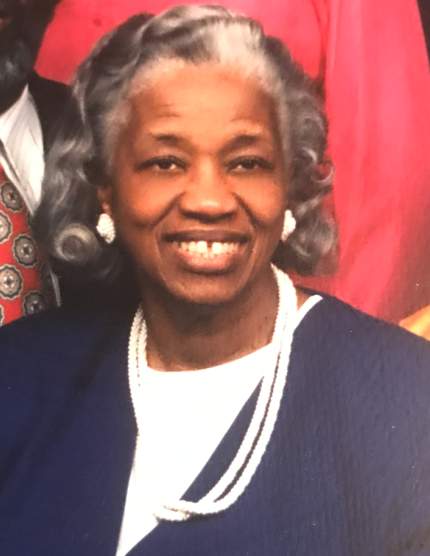 “Preserve Me Oh God, for in Thee do I put my trust” Psalms 16:1 was the favorite scripture of  Mother Ola Adessa Pendar Fitzpatrick, who was born on October 26, 1937 to Willie Precious Johnny Jones and Mercie Nathaniel Pendar in Miami, Florida.  She was given her middle name after her  grandmother “Adessa” who was a midwife.  Mother Ola was the middle child with two sisters – Mercedes Wesley  and Aurora Yvonne  Cooper.

When Mother Ola was 14 years old her parents passed away, and Mother Ola and her sisters went to live with her father’s only brother and his wife – Oswald and Thelma Turner.  In 1954,  Mother Ola graduated from Dorsey High School at the age of 16, and started her advance studies in the fall of that same year at Edward Waters College in Jacksonville, Florida.  She studied hard and earned an Associate Degree in Education.  After receiving her Associate Degree in Education from Edward Waters in the fall of 1956, Mother Ola moved to Columbia, South Carolina to start working on her Bachelor of Science Degree at Allen University.  During her sophomore year at Edward Waters, Ola caught the eye of a young gentleman on a basketball scholarship named Sylvester Fitzpatrick from Akron, Ohio - and they began to date.

While at Allen University, Mother Ola traveled to Akron, Ohio to visit Sylvester’s parents.  It was during that summer visit that they ran off and got hitched (eloped on August 21, 1957) in Gary, Indiana.  When they returned to school in Columbia, they kept there union a secret for some time.  Mother Ola went on to finish her studies at Allen University and earned a Bachelor of Science in Education in 1958.

The head of the Allen University Education Department helped Mother Ola get her first job in Columbia, South Carolina as a 3rd grade teacher, where she taught for one year.    Sylvester was also at Allen University finishing his last year of school.  During that year of teaching in South Carolina,  the newly married couple learned that they were expecting their first baby.  With that news, they moved to Akron, Ohio.   In Ohio,  Mother Ola taught 1st grade in Barberton, Ohio for 1 ½  years and over 30 years in the Akron Public School System. Mother Ola’s compassion and no nonsense approach to academics and discipline earned her the respect of her students and administration.  Mother Ola retired from teaching in the school systems in 1994.

Mother  Ola  also minored in Art, so she put her creative abilities to work in her craft business creating flower arrangements, gift baskets, and weddings decorations.   She was the master baker of her famous butter cookies. Some of her favorite things were:  the color yellow, Christmas, potato salad, Psalms 91, Walt Disney Resorts, HGTV, camping, basketball (spectator only), family dinners, dogs(Poodles), and Cadillac cars.

One of the funniest things Ola loved to do after opening her Christmas gifts was to take all the bows from her gifts  and place them on her head…it was a sight to see!!! The thing that Ola loathe the most, as a child, was fishing because she had a strong dislike for mosquitos.  However, as a Pendar, Ola loved fish… she just preferred to catch hers at the local fish market!

To order memorial trees or send flowers to the family in memory of Ola Fitzpatrick, please visit our flower store.