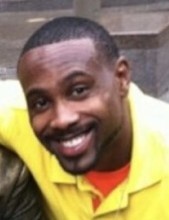 Fadell ‘Scooter’ Walter, a life-long resident of Akron, Ohio, passed away unexpectedly on October 12th, 2021, at the age of 36 while on vacation in Los Cabos, Mexico.

Fadell was born in Talladega Alabama on July 8th, 1985, to Lionel and Lenay Walter.  He attended Firestone High School where he participated in varsity sports, he was known specifically for his athletic jumping capabilities (jumping over anything and everything he saw). He was a leader and mentor to everyone he met. After High school, He attended the University of Akron and most recently he worked as a top sales associate at Spectrum Communications. Fadell was a hardworking man that carried two jobs the majority of his life. On June 12th, 2011, he and Jazzmon welcomed their son Fadell Jr. He was a family man to the core. He was a man’s man that was protective, dependable, and handy.

Fadell was a devoted father and avid traveler. He enjoyed spending time with family and traveling to different destinations. Fadell had visited numerous countries and more than half of the United States. He often played sports at the local community centers and was known for his agility and athleticism. He was a spiritual man who loved to share his worldly knowledge with others. Fadell had a heart of pure gold and he wanted the best for everyone and he pushed, supported, uplifted and encouraged everyone around him. He will be deeply missed by his family, friends and all who knew him.

Fadell is survived by his parents, Lionel Walter of Baton Rouge, Louisiana and Lenay Walter of Akron, Ohio; his fiancé, Jazzmon Britton of Akron, Oh; his son,  Fadell Walter Jr. of Akron, Ohio; his grandfather, Lenza McElrath of Cleveland, Ohio; his grandmother Margaret Walter of Baton Rouge, Louisiana; his siblings, Tationya McElrath of Arlington Virginia,Tanisha Walter of Akron and Kadell (Breyonna) Walter Sr., also of Akron, Glen Davis II of Columbus, Latrece Honre of Baton Rouge La. and Patrick Shelton of Lafayette La.; his nephews Lonnie Dampier and Kadell Walter Jr., nieces Amiyah Campbell, Kendall Walter and Aliyah Walter and a host of family and friends. He was preceded in death by his Grandfather Nelson Walter Sr, and his grandmother, Lula McElrath.

To order memorial trees or send flowers to the family in memory of Fadell Walter, please visit our flower store.