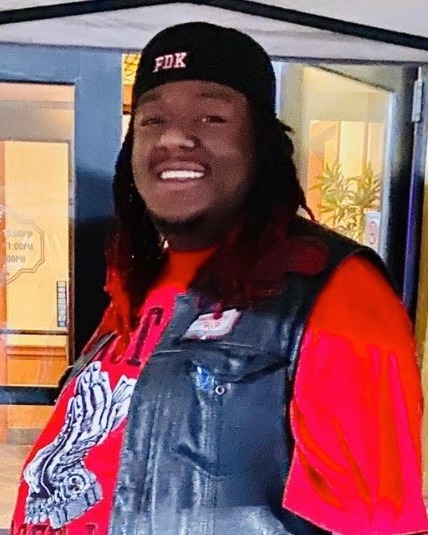 Deonte’ Thomas Burnette, 31 went home to be with the Lord on January 13, 2023. He was born on August 20, 1991 in Akron Ohio to his loving parents, Cynthia Smith and Darnell Harris.

While growing up, Deonte’ learned the importance of family, loyalty ,and respect. He was a very soulful child he loved, listening to music especially Luther Vandross as well as his gospel.
Deonte’ was a protector naturally. He was compassionate to those in need, and he was fiercely loyal to those he loved. His friendships were important to him, and he made sure he let them know how he felt about them. He loved to make people laugh and had jokes galore just an all-around good guy with an infectious smile. And like most people that are protectors they also like to put things together, or fix things which would explain why Deonte’ grew fond of mechanics. He could fix just about anything and didn’t have a problem doing so if it was something he didn’t know he knew just who would and that’s his older cousin Renzy Burnette whom he looked up to for so many things.
At a young age, Deonte’ was introduced to a world that later on became one of the biggest parts of his heart and his life and that’s becoming a loyal member of the Innkeepers motorcycle club and given the club name DP where the motto is, I am my brothers keeper, I am my sister keeper which he lived by everyday. He followed the footsteps of his late father Darnell, a.k.a. Doc Harris where he was elected club president. One thing about Deonte’ , a.k.a. DP he love to ride it didn’t matter how far that road trip was he was going to make it.
On November 18, 2017 Deonte’ married his best friend Kenni (Miller)Burnette. To know them as a couple you know that the vows that were taken before God between them were kept. Kenni took care of her husband throughout is fight and never wavered. On this day the two families became one that blended their children Devonte’ , Yasmer, Seri, Kehya, Deonte’ , King, Joselle, and Jahaiana.
Deonte' is preceded in death by Darnell Harris (father), Kayla Mayle (sister), Marie Holiday (Mamae Grandmother) Charles Oliver (grand father) Doris Burnette (Great Grandmother).
Deonte’ leaves to cherish his memory, his loving wife Kenni Burnette and children, Cynthia (Jerald) Smith (parents), Rose Burnette (Grandmother/ Best friend), Shawn, James, Darnell, Jalisa, Janessa, Lil. Deonte’ , Darrell, Kenyetta , Brandon, Caleb, Ny, Jacoby, Derrick and Kyra (Siblings). Letitia, Melinda (Aunts) Amberle (Auntie Mom). Deon (Uncle). A host of nieces, nephews, aunts, uncles, cousins, and friends.
A special thank you to the woman that calls him her nephew son, her big baby his Auntie Am for being there to help, support and love him at every turn of his life and transition he loves you and a special thank you to Thomas Brown for being consistent and loyal.
To order memorial trees or send flowers to the family in memory of Deonte' Thomas Burnette, please visit our flower store.