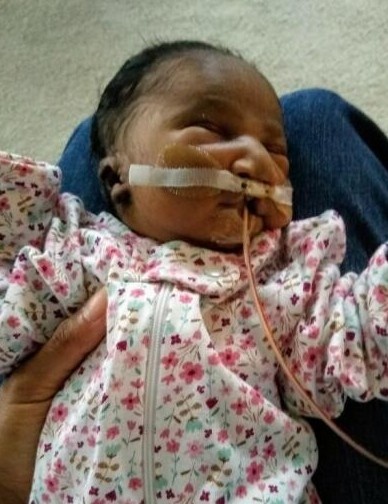 Aziza N'Gozi Henderson was born on October 11, 2020.  Despite the doctors grim prognosis she defied the odds and was born alive with Trisomy 13.  Aziza graced this earth for three full weeks during which she showed her spunk by letting the nurses and doctors know she did not want them bothering her, thoroughly enjoying her massage, and lovingly cuddling with her family, talking to and looking at us with her beautiful eyes.  She enjoyed kisses and hugs from her sisters and absolutely loved being held by her brothers!  Aziza, daddy's Tater Tot and mommy's Little Lady Baby!  She gave us so much joy!  Aziza blessed us with her presence until her promotion to our Lord's Heavenly Arms on November 1, 2020 when she passed peacefully surrounded by family.


God Saw You
God saw you getting tired, when a cure was not to be
So He wrapped His arms around you and whispered "Come to me"
You didn't deserve what you went through so he gave you rest
God's garden must be beautiful He only takes the best
And when I saw you sleeping so peacefully and free from pain
I cannot wish you back to suffer that again
~Author Unknown

To order memorial trees or send flowers to the family in memory of Aziza Henderson, please visit our flower store.